Autism Berkshire’s joint chair of trustees Ewan R Duncan had to battle the elements when he took on the Three Peaks Challenge last weekend to raise funds for our work.

Although it was the middle of August, he endured wild, wet and windy conditions on Ben Nevis, Scafell Pike and Snowdon, but still completed the ascents and descents of the three highest mountains in Scotland, England and Wales within 24 hours.

As a former officer in the Army and the Royal Marines, Ewan is no stranger to harsh conditions outdoors but he said: “It was very tough, worse than I had anticipated and I am still feeling exhausted. However, it was a real challenge and I was delighted to have completed it.

“More importantly, my sponsors were very generous in donating money – from all over the world – and right now, it looks like some £3,000 has been raised for our charity.”

Anyone who would like to make a donation can still do so online at Ewan’s Virgin Moneygiving page.

This is Ewan’s account of the challenge, which he tackled on Friday, August 19, and Saturday, August 20:

“The weekend was an epic! Having started climbing Ben Nevis at 5pm in daylight on Friday, the weather quickly deteriorated and at the summit it was foggy, windy, cold and very wet. I changed into duvet jacket, mitts and then put back on my already soaked through waterproof jacket and trousers. This set the trend for the weekend. 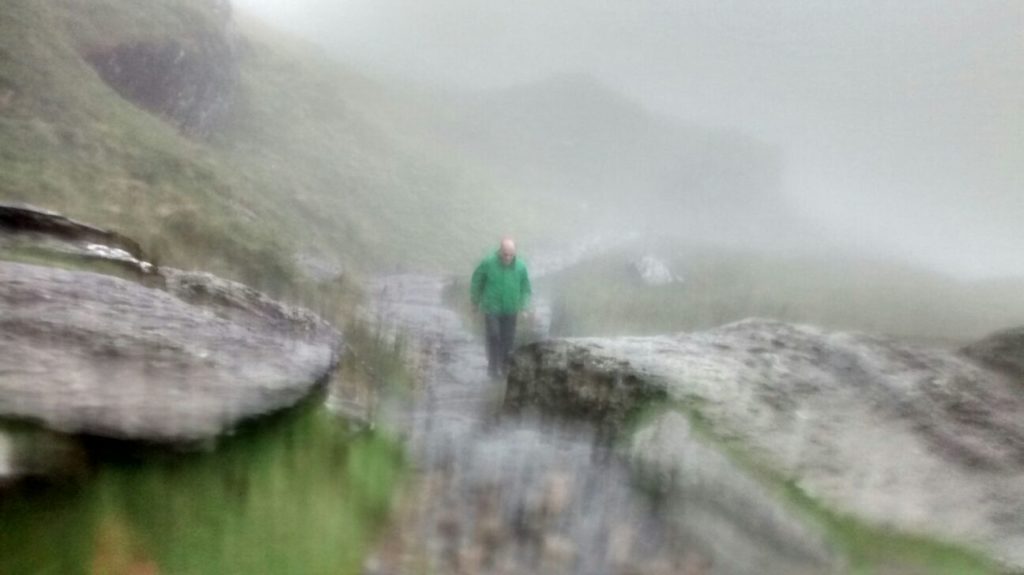 Ewan braved horrendous weather on Snowdon to complete the challenge

“Having descended Ben Nevis in the dark (thank goodness for modern-day head torches) we went to Scafell Pike and ascended the mountain in darkness and very heavy rain, which stayed with me for the rest of the climb. Again very cold and windy on top, visibility was awful. I was navigating using memory, GPS, map and the tracks.

“Next came the worst of all – the long slog up Wales’ highest mountain. The weather was the worst too – constant driving rain, gusting heavy winds (they even closed the railway up the mountain due to the weather) and again fog on the mountain tops. This was the most dangerous too, given I was blown over at one point.

“I met a number of groups doing the same Three Peaks Challenge on Ben Nevis, a few were seen on Scafell Pike but none made it to Snowdon. I descended Snowdon and thankfully completed the challenge close to 24 hours, just making it in time.

“I changed clothes three times and drank lots of water, though ate little. I had good mountain equipment with me and, thankfully, some experience of these conditions.”

He was driven between the mountains by his friends Rob Heatly and Dave Morgan.