Becka Adams drew inspiration from her autistic sister Jessica when she when she decided to raise funds for Autism Berkshire by taking on the challenge of running her first half-marathon.

On Sunday, May 13, 18-year-old Becka, from Bracknell, who works as an English and maths tutor for children, will line up with hundreds of other runners at the Bracknell Half-Marathon after putting herself through a tough training regime for the past few months. 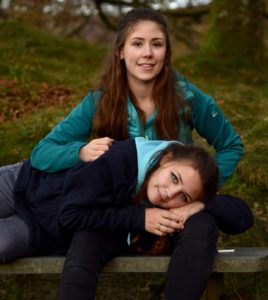 Strong bond: Sisters Becka and Jessica Adams in a recent picture, recreating a photo taken when they were younger, below 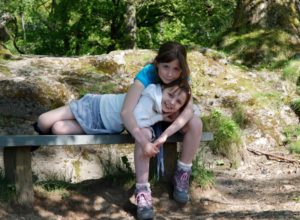 She said: “I’m very sporty, though running isn’t really my thing, but I think that when you are raising money for something, why just do something you do anyway?

“The people I’m raising money for all have a challenge in their life, so I’m going to give myself a challenge too.

“When she was diagnosed with Asperger’s at 13, Jessica had a lot of challenges to face, socially, within school, and self-acceptance as well. She has faced her challenges, so I’m going to face one to raise money for her and the charity.”

She added: “Although Jessica now has the diagnosis, and although it has been challenging and we may look at things differently now, we’re still the same – we still have the same relationship and she’s still the same person, with or without the label.”

Their mother turned to Autism Berkshire for information about autism and how to find support after Jessica was given an Asperger’s syndrome diagnosis in 2014, at a time when she was struggling in school. Jessica is currently revising for her GCSE exams.

Becka added: “If I was to say to mum ‘where do I go for support, or who can I support, what charity can I raise awareness for?’, my mum would definitely say Autism Berkshire.

“At the time, I remember it felt like we were the only people in the world who were going through this. It was ‘great, we’ve been given a diagnosis, but what does that mean, where do we go, what do we do from here?’.”

Becka is now completing her final preparations for the half-marathon. She said: “Getting into the training was quite tricky, especially adding it to my daily routine and over the winter in the dark, but I think that the closer it has got to the event, the easier it has become.

“My mind is into gear now, when not having had the experience of training for a half-marathon made it difficult to know when to start and what to do and when.”

Click here to visit Becka’s JustGiving page to sponsor her.

She has set herself the target of raising at least £550 and has already received sponsorship of more than £300 from family and friends.