Autism Berkshire members attending the 2018 AGM were told by outgoing chair of trustees Ewan Duncan that the charity was “much better placed” than in 2015 when he joined the board.

The annual general meeting, held at the Crowne Plaza Hotel in Reading on Monday, November 26, heard that reserves had been built up to more than £48,000 at the end of the 2017-18 financial year, against a backdrop of a continued decline in grants to fund services from the public sector.

He said: “We are much better placed financially than we have been for a number of years, but securing funding remains a constant challenge.

“We thought long and hard about closing this charity three years ago, because our finances were in such a position that we had to answer that question.

“It was pretty tough but we restructured and our chief executive Jane Stanford-Beale and finance manager Tony Walker did a lot of work to make sure we could maintain services and retain as many staff as possible to deliver those services. It was a tough time, because we had to maintain reserves as well, so that if it ever did have to close, we could pay our staff and meet our liabilities.

“Three years on, the reserves we now have mean we’re in a much better position and give us confidence moving forward into the next year.” 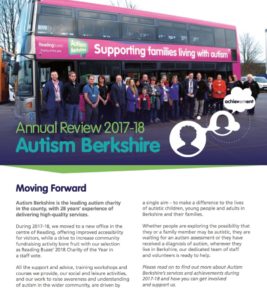 The AGM was Ewan’s last as the chair and as a member of the board of trustees, as he had decided to step down at the end of his three-year term of office.

He thanked his fellow trustees for their help and support and the staff and volunteers for all that they did to support autistic people and their families across Berkshire, particularly chief executive Jane Stanford-Beale, who is herself a volunteer.

He also thanked people who took on fundraising challenges and organised events to raise money for Autism Berkshire to help maintain services: “So many people do things to contribute to our funds and it is important to recognise that.”

Ewan will be succeeded as chair of the trustees by Richard Flemming, who was elected as a trustee at the previous AGM. Richard, who lives in Taplow, is a senior partner in a City of London financial firm and has a close friend with autistic children.

Sandra Stubbs was re-elected for a second three-year term as a trustee at Monday’s meeting. She is a service user of the charity, as she has family members with autism, and has many years’ experience working in health and social care. Sandra lives with her family in Wokingham.

After the formal business of the meeting was concluded, members and guests heard a talk from autistic trainer and speaker Richard Maguire on the theme of Autism: Growing into Adult Life, Relationships and the Workplace. Click here to read a report on his address,