We are pleased to announce that more than £11,700 was raised for Autism Berkshire during our time as Reading Buses’ 2018 Charity of the Year.

A giant cheque for most of the money was presented to our Chief Executive Officer, Jane Stanford-Beale, by Reading Buses’ Chief Executive, Robert Williams, at a ceremony at the company’s depot today.

The double-decker bus which has carried a special Autism Berkshire livery on routes around Reading and beyond for the past year formed the backdrop for the event.

Mr Williams said that the grand total of £11,719.61 was the result of “a really quite amazing fundraising effort by all concerned”.

He said that fundraising activities had been taking place all the way through the year, from the launch of the partnership and the company’s annual Night with the Stars awards event, through the annual Open Day in July, to drivers wearing Santa hats at the wheel of their buses in the run-up to Christmas. Driver Darcey Harrington raised £1,200 by making a skydive.

He added:  “I’m delighted to be able to hand over a cheque for this phenomenal amount. It’s great for me to come into an organisation that has such a strong background in charity engagement – with this being the 11th year that the company has had such a partnership.

“We are one of the biggest and most visible employers in the town and like to support the focus of charities such as Autism Berkshire and recognise the good work that they do.  This has certainly been the case during 2018.” 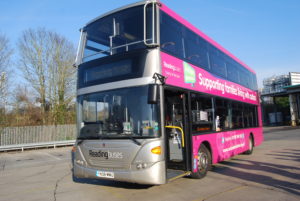 Jane said: “We would like to thank Reading Buses staff for choosing us as the Charity of the Year and for the fantastic amount raised. This will help us to continue to provide the best possible advice, support and leisure services for autistic people of all ages and their families throughout Berkshire.

“It has been a great year, with lots of highlights, starting with the launch. James Burke, the boy whose picture appeared on the bus, was just so excited when he saw his picture on the side. 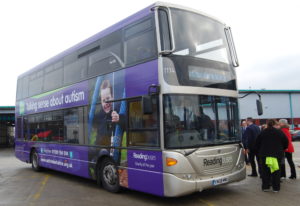 “When we took the bus to Broad Street for Autism Awareness Week some of our young supporters managed to flatten the battery, so the engineering team had to come to the rescue.

“We had a great time getting ready for the open day, with staff and volunteers going on a course to learn how to decorate some out of the world cupcakes to match the theme of the event.

“We provided a sensory bus and quiet zone, and the autism connection with the event helped to attract visitors from as far away as Kent, including 60 members of the Transport Sparks group of autistic transport enthusiasts from London.”

Jane also presented an autism awareness certificate to Mr Williams, to recognise the company’s commitment to spreading understanding of autism and disabilities among its employees.

As part of the company’s training programme, an Autism Berkshire trainer and an autistic adult have led a series of hour-long training sessions for bus drivers working towards their Certificate of Professional Competence, along with other staff.