Autism Berkshire’s 2020 Annual General Meeting heard about the challenges that the charity faces as a result of the coronavirus pandemic.

With social distancing restrictions ruling out holding a public meeting, the AGM instead took place online on Sunday, November 1, with members and staff logging in from their homes.

In the absence of the chair of trustees, Richard Flemming, due to urgent family business, Chief Executive Officer Jane Stanford-Beale presented the annual report for 2019-20 and outlined the impact of the pandemic on the charity’s services since March.

She said that as many activities as possible had been moved online for the time being, including autism advice workshops and courses. 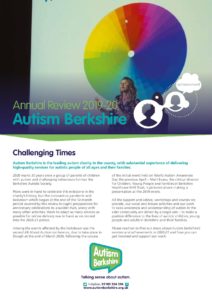 There had been a good response from parents, with many being able to attend workshops for the first time, as they were working from home and able to adjust their hours to fit in a 90-minute workshop or course session.

Teen Life courses, launched just before the lockdown, had proved popular and Jane noted: “One thing that has surprised is that we have a lot of parents of girls, which just shows they need more advice and help than is currently out there.”

A key focus of the AGM was the work of the Benefits Service, which helps autistic people and their families with applications for welfare benefits and appeals.

With increasing demand for benefits advice and support at hearings, it was decided in mid-2019 to recruit an additional adviser to help the service’s manager, Kevin Jackson. Carrie Steers joined the charity in the autumn.

Between them, Kevin and Carrie helped clients to secure more than £235,000 in benefits during the 2019-20 financial year, from initial applications or at the appeal stages.

Jane said: “This is a significant amount and this is a service that is very much needed.”

She added that Autism Berkshire had also secured a multi-year grant to fund the service from the Henry Smith Charity and thanked staff and trustees for the work that had gone into securing the grant.

Kevin and Carrie said that while there had been a period of reduced demand for help over the summer of 2020, they were now busy with online benefits workshops and advice appointments, as well as representing people at mandatory reconsideration and appeal tribunal hearings.

Tribunals were a particular challenge, because they are being carried out by telephone due to the pandemic, but also because rather than being heard by judges based locally in Reading or High Wycombe, which would be normal practice, cases are currently being allocated to judges throughout England.

Jane added: “The key thing with benefits is that if you’re not sure, do ask Kevin or Carrie, so they can make sure that application forms go in with as much relevant information as possible. It’s much better to get it right first time than having to go through mandatory reconsiderations or to tribunals.”

Sue Benford, a member of the charity, said Kevin’s support had been invaluable when her son’s benefits were withdrawn after a DWP assessment. After a reconsideration hearing conducted by phone, his benefits were reinstated for an eight-year period.

Ann Taylor, also a member, asked about funding for the adult social groups – Bear With Me and the 197 Club. She said their online activities, such as quizzes, had been invaluable during the pandemic.

Jane said that the charity was working to secure further funding and that SocialEyes courses for adults were being funded by the NHS clinical commissioning groups, while a coronavirus emergency grant from the National Lottery Community Fund would fund a Chop & Chat course online at the start of 2021.