The meeting took place at the Thames Valley Adventure Playground in Taplow, near Maidenhead, on Sunday, November 21, in conjunction with a fun day for families of members. And members were also able to join the proceedings online.

The motion to amend the objects of the charity that was approved at the AGM means moves will begin to formally change the area of interest from Berkshire to Berkshire, Buckinghamshire, Oxfordshire and Milton Keynes and nearby areas. 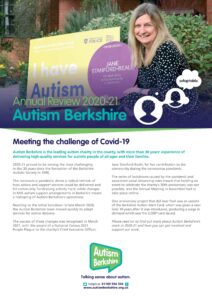 The proposal will now need to be approved by the Charity Commission, before a motion to confirm the new area of interest is put to members at a further General Meeting of the charity next year.

Autism Berkshire’s Chief Executive Officer, Jane Stanford-Beale, told the AGM that the change was needed both to reflect current work with Thames Valley Police to turn the former Berkshire Autism Alert Card into a Thames Valley-wide scheme, operating across the police force’s full area, and a forthcoming change to the structure of the NHS, which will result in future contracts for provision of autism support services being put out to tender on a regional basis, rather than just within Berkshire.

In the absence of Richard Flemming, the chair of trustees, Adam Bermange, the treasurer, presented the annual report for 2020-21 and noted the impact of the coronavirus pandemic on the charity’s services. Many of these, including autism advice workshops and course, were still being delivered online, with continued strong take-up from parents and carers.

He thanked the staff for adapting to the challenges of working from home after the closure of the charity’s office, with funding redirected to frontline support services, and highlighted work by Julia Cox to adapt the National Autistic Society’s Teen Life course for online delivery.

Autism Berkshire became the first organisation in the country approved by NAS to run the course online and Julia had advised Teen Life trainers at other organisation about how to make the switch themselves.

During 2020-21, the NHS Clinical Commissioning Groups in Berkshire ran tenders for the provision of support for families of autistic and ADHD children pre- and post-diagnosis.

While the tender in East Berkshire had been won by a private contractor, GEMS4Health, Autism Berkshire had secured the contract for the west of the county and successfully launched the new Berkshire West Autism & ADHD Support Service at the beginning of 2021.

In his role as treasurer, Adam also reported on the charity’s finances. He said that contrary to the trustees’ initial expectations that the coronavirus pandemic would lead to a deficit, the charity had broken even over the year and remained in a strong position financially, as a result of successful grant applications and Government business support payments and the staff furlough scheme.

Although elections for new trustees were due to be held, no nominations had been received before the deadline. However, Jane Stanford-Beale said a number of people were interested in joining the board and would be invited to observe a trustees’ meeting before deciding whether they wanted their names to go forward for election at a future general meeting.

She thanked outgoing trustees Sandra Stubbs and Margaret Collum for their invaluable help and support in recent years.

Members were then invited to ask questions. Hattie Frankl asked if it would be possible to provide more support for autistic adults to attend autism-friendly events.

Jane Stanford-Beale said that a grant had been received the previous week from the Shanly Foundation, that would allow a new walking group for adults to be launched soon. She added that work was under way to try to secure further funding to offer improved support to autistic adults throughout the county.

Before closing the AGM, Adam reminded members that the trustees welcomed comments and suggestions about the charity’s work at any time.